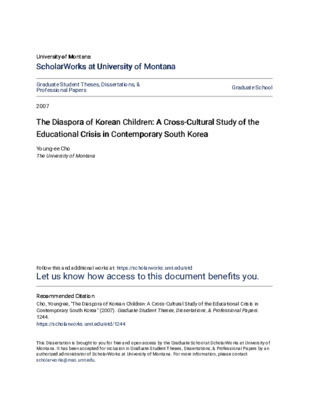 The Diaspora of Korean Children: A Cross-Cultural Study of the Educational Crisis in Contemporary South Korea

The diaspora of Korean children first started after the Korean War in the 1950s. Abandoned by their impoverished mothers and shunned by society, many orphan children were sent abroad for adoption, which was the best, if not the only, available solution at the time. Half a century later, South Korea today is no longer a desperately poor country, and yet an increasing number of young children are still being sent abroad. The exodus of children, termed as the diaspora of Korean children in this study, is an out-of-country solution chosen by both students and parents in response to an educational dilemma in Korea, which signifies the urgent issues of public education in the increasingly globalized world today. By anchoring the educational crisis in contemporary South Korea in historical and cultural contexts, a primary purpose of this interdisciplinary study is to explore the seeming contradiction between the remarkable successes of Korean education, in particular its role in Korea\u27s remarkable social and economic transformation, and its fundamental weaknesses. Its historical and cultural background, including the experience of war, provides context for understanding the phenomena of Korean society manifested in the expressions such as parachute kids, wild geese families, cuckoo mommies and penguin daddies. This study also investigates the relevance of Confucian values in explaining Korea\u27s educational crisis today. It places Korea\u27s cultural underpinnings and complex historical experience in the context of the quest for modernization. Some critics blame Confucianism as the main culprit for the educational crisis today. But others disagree and argue that, despite its excesses and rigid applications in the past, Confucianism holds promise for addressing some of the problems of modern society. By reevaluating the efficacy of Confucian values in contemporary Korean society and in particular its complex and even conflicting interpretations in justifying competing models of education, this study addresses the question that many societies are facing today, including the United States, At what cost, education