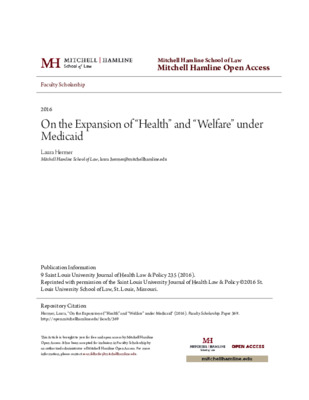 On the Expansion of “Health” and “Welfare” under Medicaid

Medicaid was intended from its inception to provide financial access to health care for certain categories of impoverished Americans. While rooted in historical welfare programs, it was meant to afford the deserving poor access to the same sort of health care that other, wealthier Americans received. Yet despite this seemingly innocuous and laudable purpose, it has become a front in the political and social battles waged over the last several decades on the issues of welfare and the safety net. The latest battleground pits competing visions of Medicaid. One vision seeks to transform Medicaid from a health care program into something sharing key trappings of cash welfare programs. Despite the delinkage of Medicaid in most respects from cash welfare with the passage of the Personal Responsibility and Work Opportunity Reconciliation Act of 1996, some states sought to tie access to Medicaid benefits to adherence to particular healthy behaviors, completion ofpreventive care measures, and assumption of increased financial responsibility. This trend has increased in the post-Affordable Care Act environment. A competing vision in states seeks to include within Medicaid\u27s auspices various means of ameliorating not merely medical problems, but also socioeconomic determinants ofhealth. States taking this route are heeding data supporting the premise that, in order to better and more cheaply address the health care needs of everyone, we need to address not only financial access to health care but also environmental, economic, and social factors that can lead to bad health. I will examine these competing visions of Medicaid, and consider the extent to which the Secretary of the U.S. Department of Health and Human Services can arguably grant lawful waivers to these states for these expansions or constrictions. I will further consider the implications of these visions, and their success or failure, on Medicaid\u27s longer-term prospects, as well as on the greater health care system