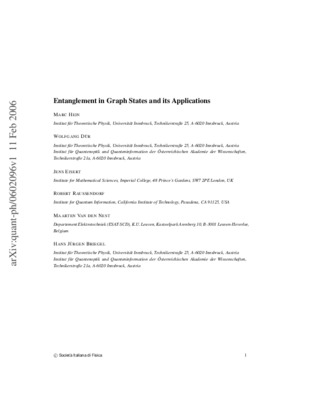 Entanglement in Graph States and its Applications

Graph states form a rich class of entangled states that exhibit important aspects of multi-partite entanglement. At the same time, they can be described by a number of parameters that grows only moderately with the system size. They have a variety of applications in quantum information theory, most prominently as algorithmic resources in the context of the one-way quantum computer, but also in other fields such as quantum error correction and multi-partite quantum communication, as well as in the study of foundational issues such as non-locality and decoherence. In this review, we give a tutorial introduction into the theory of graph states. We introduce various equivalent ways how to define graph states, and discuss the basic notions and properties of these states. The focus of this review is on their entanglement properties. These include aspects of non-locality, bi-partite and multi-partite entanglement and its classification in terms of the Schmidt measure, the distillability properties of mixed entangled states close to a pure graph state, as well as the robustness of their entanglement under decoherence. We review some of the known applications of graph states, as well as proposals for their experimental implementation.Comment: 99 pages, 24 figures, 5 tables, LaTeX. To appear in the Proceedings of the International School of Physics "Enrico Fermi" on "Quantum Computers, Algorithms and Chaos", Varenna, Italy, July, 200