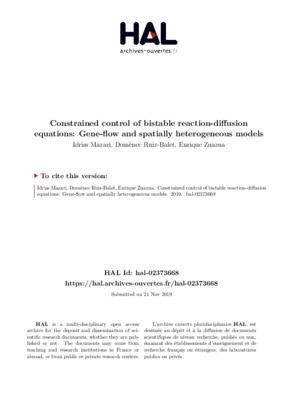 In this article, we study gene-flow models and the influence of spatial heterogeneity on the dynamics of bistable reaction-diffusion equations from the control point of view. We establish controllability results under geometric assumptions on the domain where the system evolves and regularity assumptions on the spatial heterogeneity. The non-linearity is assumed to be of bistable type and to have three spatially homogeneous equilibria. We investigate whether or not it is possible, starting from any initial datum, to drive the population to one of these equilibria through a boundary control u, under the natural constraints 0 u 1. In the case of the gene-flow model, the situation is similar to [35, 33] and the results only depend on the geometry of the domain. In the case of a spatially heterogeneous environment, we distinguish between slowly varying environments and of rapidly varying ones. We develop a new method to prove that controllability to 0, θ or 1 still holds in the slowly varying case, and give examples of rapidly varying environments where controllability to 0 or 1 no longer holds. This lack of controllability is established by studying the existence of non-trivial solutions which act as barriers for controlling the dynamics, which are of independent interest. Our article is completed by several numerical exepriments that confirm our analysis