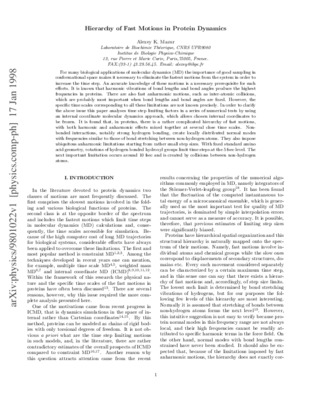 The Hierarchy of Fast Motions in Protein Dynamics

For many biological applications of molecular dynamics (MD) the importance of good sampling in conformational space makes it necessary to eliminate the fastest motions from the system in order to increase the time step. An accurate knowledge of these motions is a necessary prerequisite for such efforts. It is known that harmonic vibrations of bond lengths and bond angles produce the highest frequencies in proteins. There are also fast anharmonic motions, such as inter-atomic collisions, which are probably most important when bond lengths and bond angles are fixed. However, the specific time scales corresponding to all these limitations are not known precisely. In order to clarify the above issue this paper analyses time step limiting factors in a series of numerical tests by using an internal coordinate molecular dynamics approach, which allows chosen internal coordinates to be frozen. It is found that, in proteins, there is a rather complicated hierarchy of fast motions, with both harmonic and anharmonic effects mixed together at several close time scales. Non-bonded interactions, notably strong hydrogen bonding, create locally distributed normal modes with frequencies similar to those of bond stretching between non-hydrogen atoms. They also impose ubiquitous anharmonic limitations starting from rather small step sizes. With fixed standard amino acid geometry, rotations of hydrogen bonded hydroxyl groups limit time steps at the 5 fsec level. The next important limitation occurs around 10 fsec and is created by collisions between non-hydrogen atoms.Comment: 7 two-column pages, 5 eps figures, RevTeX/LaTe