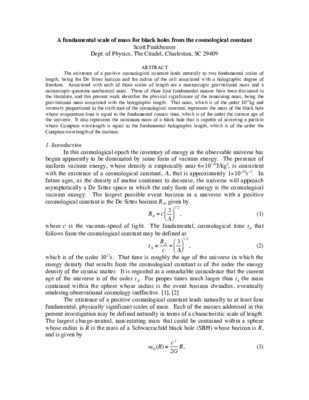 The existence of a positive cosmological constant leads naturally to two fundamental scales of length, being the De Sitter horizon and the radius of the cell associated with a holographic degree of freedom. Associated with each of those scales of length are a macroscopic gravitational mass and a microscopic quantum mechanical mass. Three of those four fundamental masses have been discussed in the literature, and this present work identifies the physical significance of the remaining mass, being the gravitational mass associated with the holographic length. That mass, which is of the order 10^{12}kg and inversely proportional to the sixth root of the cosmological constant, represents the mass of the black hole whose evaporation time is equal to the fundamental cosmic time, which is of the order the current age of the universe. It also represents the minimum mass of a black hole that is capable of accreting a particle whose Compton wavelength is equal to the fundamental holographic length, which is of the order the Compton wavelength of the nucleon.Comment: 5 pages, added discussion on minimum mass for accretio