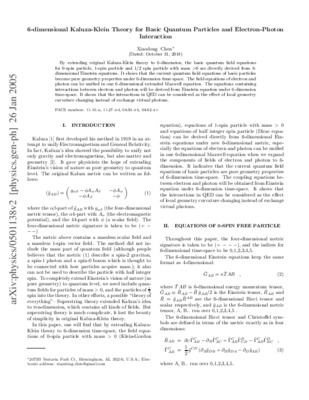 By extending original Kaluza-Klein theory to 6-dimension, the basic quantum field equations for 0-spin particle, 1-spin particle and 1/2 spin particle with mass >0 are directly derived from 6-dimensional Einstein equations. It shows that the current quantum field equations of basic particles become pure geometry properties under 6-dimension time-space. The field equations of electron and photon can be unified in one 6-dimensional extended Maxwell equation. The equations containing interactions between electron and photon will be derived from Einstein equation under 6-dimension time-space. It shows that the interactions in QED can be considered as the effect of local geometry curvature changing instead of exchange virtual photons.Comment: 5 page