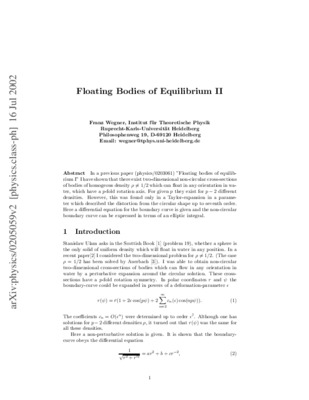 In a previous paper (physics/0203061) ''Floating bodies of equilibrium I'' I have shown that there exist two-dimensional non-circular cross-sections of bodies of homogeneous densities rho not equal 1/2 which can float in any orientation in water, which have a p-fold rotation axis. For given p they exist for p-2 different densities. However, this was found only in a Taylor-expansion in a parameter which describes the distortion from the circular shape up to seventh order. Here a differential equation for the boundary curve is given and the non-circular boundary curve can be expressed in terms of an elliptic integral.Comment: Latex, 12 pages, 4 figures; figure 3 reflected, two signs correcte