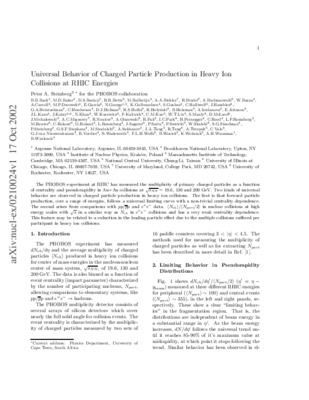 By Peter Steinberg and PHOBOS Collaboration
Get PDF (118 KB)

The PHOBOS experiment at RHIC has measured the multiplicity of primary charged particles as a function of centrality and pseudorapidity in Au+Au collisions at sqrt(s_NN) = 19.6, 130 and 200 GeV. Two kinds of universal behavior are observed in charged particle production in heavy ion collisions. The first is that forward particle production, over a range of energies, follows a universal limiting curve with a non-trivial centrality dependence. The second arises from comparisons with pp/pbar-p and e+e- data. N_tot/(N_part/2) in nuclear collisions at high energy scales with sqrt(s) in a similar way as N_tot in e+e- collisions and has a very weak centrality dependence. This feature may be related to a reduction in the leading particle effect due to the multiple collisions suffered per participant in heavy ion collisions.Comment: 3 Pages, 4 Figures, contributed to the Proceedings of the 31st International Conference on High Energy Physics, Amsterdam, Netherlands, 24-31 July, 200