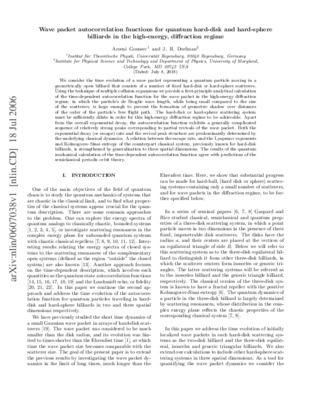 We consider the time evolution of a wave packet representing a quantum particle moving in a geometrically open billiard that consists of a number of fixed hard-disk or hard-sphere scatterers. Using the technique of multiple collision expansions we provide a first-principle analytical calculation of the time-dependent autocorrelation function for the wave packet in the high-energy diffraction regime, in which the particle's de Broglie wave length, while being small compared to the size of the scatterers, is large enough to prevent the formation of geometric shadow over distances of the order of the particle's free flight path. The hard-disk or hard-sphere scattering system must be sufficiently dilute in order for this high-energy diffraction regime to be achievable. Apart from the overall exponential decay, the autocorrelation function exhibits a generally complicated sequence of relatively strong peaks corresponding to partial revivals of the wave packet. Both the exponential decay (or escape) rate and the revival peak structure are predominantly determined by the underlying classical dynamics. A relation between the escape rate, and the Lyapunov exponents and Kolmogorov-Sinai entropy of the counterpart classical system, previously known for hard-disk billiards, is strengthened by generalization to three spatial dimensions. The results of the quantum mechanical calculation of the time-dependent autocorrelation function agree with predictions of the semiclassical periodic orbit theory.Comment: 24 pages, 13 figure