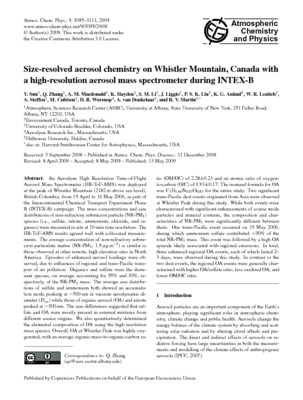 An Aerodyne High Resolution Time-of-Flight Aerosol Mass Spectrometer (HR-ToF-AMS) was deployed at the peak of Whistler Mountain (2182 m above sea level), British Columbia, from 19 April to 16 May 2006, as part of the Intercontinental Chemical Transport Experiment Phase B (INTEX-B) campaign. The mass concentrations and size distributions of non-refractory submicron particle (NR-PM&lt;sub&gt;1&lt;/sub&gt;) species (i.e., sulfate, nitrate, ammonium, chloride, and organics) were measured in situ at 10-min time resolution. The HR-ToF-AMS results agreed well with collocated measurements. The average concentration of non-refractory submicron particulate matter (NR-PM&lt;sub&gt;1&lt;/sub&gt;; 1.9 μg m&lt;sup&gt;&amp;minus;3&lt;/sup&gt;) is similar to those observed at other remote, high elevation sites in North America. Episodes of enhanced aerosol loadings were observed, due to influences of regional and trans-Pacific transport of air pollution. Organics and sulfate were the dominant species, on average accounting for 55% and 30%, respectively, of the NR-PM&lt;sub&gt;1&lt;/sub&gt; mass. The average size distributions of sulfate and ammonium both showed an accumulation mode peaking at ~500 nm in vacuum aerodynamic diameter (&lt;i&gt;D&lt;sub&gt;va&lt;/sub&gt;&lt;/i&gt;) while those of organic aerosol (OA) and nitrate peaked at ~300 nm. The size differences suggested that sulfate and OA were mostly present in external mixtures from different source origins. We also quantitatively determined the elemental composition of OA using the high resolution mass spectra. Overall, OA at Whistler Peak was highly oxygenated, with an average organic-mass-to-organic-carbon ratio (OM/OC) of 2.28&amp;plusmn;0.23 and an atomic ratio of oxygen-to-carbon (O/C) of 0.83&amp;plusmn;0.17. The nominal formula for OA was C&lt;sub&gt;1&lt;/sub&gt;H&lt;sub&gt;1.66&lt;/sub&gt;N&lt;sub&gt;0.03&lt;/sub&gt;O&lt;sub&gt;0.83&lt;/sub&gt; for the entire study. Two significant trans-Pacific dust events originated from Asia were observed at Whistler Peak during this study. While both events were characterized with significant enhancements of coarse mode particles and mineral contents, the composition and characteristics of NR-PM&lt;sub&gt;1&lt;/sub&gt; were significantly different between them. One trans-Pacific event occurred on 15 May 2006, during which ammonium sulfate contributed &gt;90% of the total NR-PM&lt;sub&gt;1&lt;/sub&gt; mass. This event was followed by a high OA episode likely associated with regional emissions. In total, three enhanced regional OA events, each of which lasted 2–3 days, were observed during this study. In contrast to the two dust events, the regional OA events were generally characterized with higher OA/sulfate ratio, less oxidized OA, and lower OM/OC ratio