The study was conducted to determine the potentials of\ud Fusarium sp as a biocontrol agent for Aphis gossypii, a key pest on\ud chilly pepper in South Sulawesi. In this study several trials were\ud performed to determine the following specific goals: 1) the values\ud of LC50 and LT50 of the fungus on A. gossypii nymphs, 2) the\ud effect of the fungus application on the population of the aphid, and\ud 3) the effect of fungicide application on the growth of Fusarium sp. culture. The study results showed that the LC50 and the LC50 andILT50 of the pathogen were 1.6 x 104 conidia/ml and 3.8 days,\ud respectively. There was a tendency that the larger the population of\ud aphid, the more aphids were infected. Therefore, the fungus is very\ud promising to be developed as a biopesticide against A. gossypii.\ud However, fungicide (mancozeb) applied at the recom-mended rate\ud showed a detrimental effect on the growth of the Fusarium sp.\ud culture; hence it is necessary to conduct further studies to find a\ud fungisicides which are safe to the entomopathogen 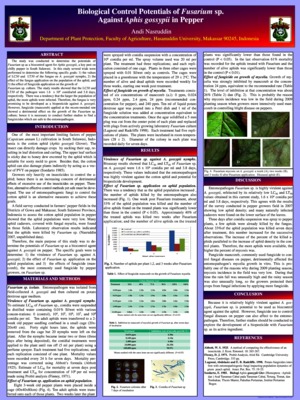 This paper was published in Hasanuddin University Repository.