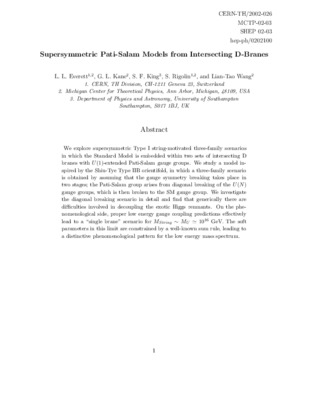 We explore supersymmetric Type I string-motivated three-family scenarios in which the Standard Model is embedded within two sets of intersecting D branes with U(1)-extended Pati-Salam gauge groups. We study a model inspired by the Shiu-Tye Type IIB orientifold, in which a three-family scenario is obtained by assuming that the gauge symmetry breaking takes place in two stages; the Pati-Salam group arises from diagonal breaking of the U(N) gauge groups, which is then broken to the SM gauge group. We investigate the diagonal breaking scenario in detail and find that generically there are difficulties involved in decoupling the exotic Higgs remnants. On the phenomenological side, proper low energy gauge coupling predictions effectively lead to a ``single brane'' scenario for M_string of order 10^16 GeV. The soft parameters in this limit are constrained by a well-known sum rule, leading to a distinctive phenomenological pattern for the low energy mass spectrum