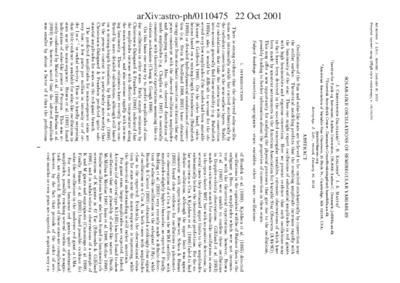 By J Christensen-Dalsgaard, H Kjeldsen and J A Mattei
Get PDF (527 KB)

Oscillations of the Sun and solar-like stars are believed to be excited stochastically by convection near the stellar surface. Theoretical modeling predicts that the resulting amplitude increases rapidly with the luminosity of the star. Thus one might expect oscillations of substantial amplitudes in red giants with high luminosities and vigorous convection. Here we present evidence that such oscillations may in fact have been detected in the so-called semiregular variables, extensive observations of which have been made by amateur astronomers in the American Association for Variable Star Observers (AAVSO). This may offer a new opportunity for studying the physical processes that give rise to the oscillations, possibly leading to further information about the properties of convection in these stars