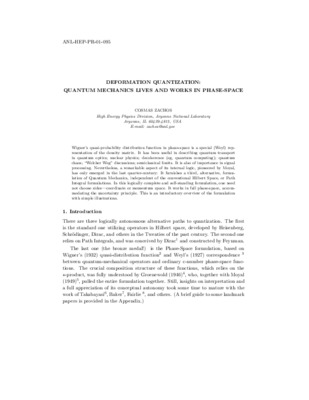 Wigner's quasi-probability distribution function in phase-space is a special (Weyl) representation of the density matrix. It has been useful in describing quantum transport in quantum optics; nuclear physics; decoherence (eg, quantum computing); quantum chaos; "Welcher Weg" discussions; semiclassical limits. It is also of importance in signal processing. Nevertheless, a remarkable aspect of its internal logic, pioneered by Moyal, has only emerged in the last quarter-century: It furnishes a third, alternative, formulation of Quantum Mechanics, independent of the conventional Hilbert Space, or Path Integral formulations. In this logically complete and self-standing formulation, one need not choose sides--coordinate or momentum space. It works in full phase-space, accommodating the uncertainty principle. This is an introductory overview of the formulation with simple illustrations