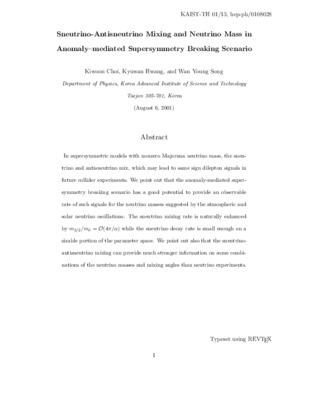 In supersymmetric models with nonzero Majorana neutrino mass, the sneutrino and antisneutrino mix, which may lead to same sign dilepton signals in future collider experiments. We point out that the anomaly-mediated supersymmetry breaking scenario has a good potential to provide an observable rate of such signals for the neutrino masses suggested by the atmospheric and solar neutrino oscillations. The sneutrino mixing rate is naturally enhanced by m_{3/2}/m_{\tilde{\nu}}={\cal O}(4\pi/\alpha) while the sneutrino decay rate is small enough on a sizable portion of the parameter space. We point out also that the sneutrino-antisneutrino mixing can provide much stronger information on some combinations of the neutrino masses and mixing angles than neutrino experiments