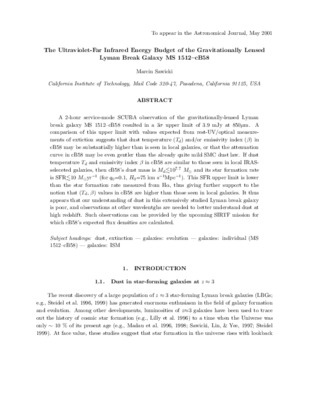 A 2-hour service-mode SCUBA observation of the gravitationally-lensed Lyman break galaxy MS1512-cB58 resulted in a 3 sigma upper limit of 3.9 mJy at 850um. A comparison of this upper limit with values expected from rest-UV/optical measurements of extiction suggests that dust temperature (T_d) and/or emissivity index (beta) in cB58 may be substantially higher than is seen in local galaxies, or that the attenuation curve in cB58 may be even gentler than the already quite mild SMC dust law. If dust temperature T_d and emissivity index beta in cB58 are similar to those seen in local IRAS-seleceted galaxies, then cB58's dust mass is M_d <~ 10^7.7 Msun and its star formation rate is SFR <~ 10 Msun/yr (for q_0=0.1, H_0=75 km/s/Mpc). This SFR upper limit is lower than the star formation rate measured from Halpha, thus giving further support to the notion that (T_d, beta) values in cB58 are higher than those seen in local galaxies. It thus appears that our understanding of dust in this extensively studied Lyman break galaxy is poor, and observations at other wavelentghs are needed to better understand dust at high redshift. Such observations can be provided by the upcoming SIRTF mission for which cB58's expected flux densities are calculated