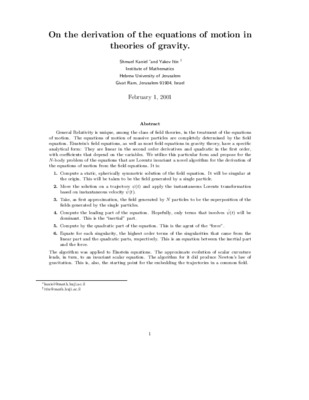 The equations of motion of massive particles in GR are completely determined by the field equation. We utilize the particular form of Einstein's field equation and propose for the $N$-body problem of the equations that are Lorentz invariant a novel algorithm for the derivation of the equations of motion from the field equations. It is: 1. Compute a static, spherically symmetric solution of the field equation. It will be singular at the origin. This will be taken to be the field generated by a single particle. 2. Move the solution on a trajectory $ {\psi(t)}$ and apply the instantaneous Lorentz transformation based on instantaneous velocity $\dot{\psi}(t)$. 3. Take, as first approximation, the field generated by $N$ particles to be the superposition of the fields generated by the single particles. 4. Compute the leading part of the equation. Hopefully, only terms that involves $\ddot{\psi}(t)$ will be dominant. This is the ``inertial'' part. 5. Compute by the quadratic part of the equation. This is the agent of the ``force''. 6. Equate for each singularity, the highest order terms of the singularities that came from the linear part and the quadratic parts, respectively. This is an equation between the inertial part and the force. The algorithm was applied to Einstein equations. The approximate evolution of scalar curvature lends, in turn, to an invariant scalar equation. The algorithm for it did produce Newton's law of gravitation. This is, also, the starting point for the embedding the trajectories in a common field