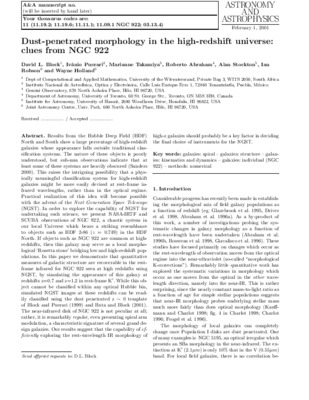 Dust-penetrated morphology in the high-redshift universe: clues from NGC922

Results from the Hubble Deep Field (HDF) North and South show a large percentage of high-redshift galaxies whose appearance falls outside traditional classification systems. The nature of these objects is poorly understood, but sub-mm observations indicate that at least some of these systems are heavily obscured (Sanders 2000). This raises the intriguing possibility that a physically meaningful classification system for high-redshift galaxies might be more easily devised at rest-frame infrared wavelengths, rather than in the optical regime. Practical realization of this idea will become possible with the advent of the Next Generation Space Telescope (NGST). In order to explore the capability of NGST for undertaking such science, we present NASA-IRTF and SCUBA observations of NGC 922, a chaotic system in our local Universe which bears a striking resemblance to objects such as HDF 2-86 (z=0.749) in the HDF North. If objects such as NGC 922 are common at high-redshifts, then this galaxy may serve as a local morphological `Rosetta stone' bridging low and high-redshift populations. In this paper we demonstrate that quantitative measures of galactic structure are recoverable in the rest-frame infrared for NGC 922 seen at high redshifts using NGST, by simulating the appearance of this galaxy at redshifts z=0.7 and z=1.2 in rest-frame K'. Our results suggest that the capability of efficiently exploring the rest-wavelength IR morphology of high-z galaxies should probably be a key factor in deciding the final choice of instruments for the NGST