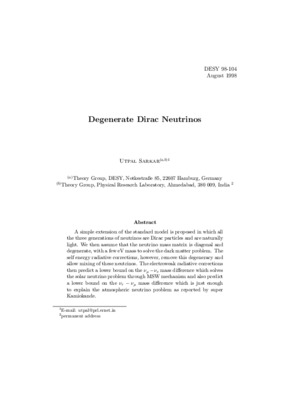 A simple extension of the standard model is proposed in which all the three generations of neutrinos are Dirac particles and are naturally light. We then assume that the neutrino mass matrix is diagonal and degenerate, with a few eV mass to solve the dark matter problem. The self energy radiative corrections, however, remove this degeneracy and allow mixing of these neutrinos. The electroweak radiative corrections then predict a lower bound on the $\nu_\mu - mechanism and also predict a lower bound on the $\nu_\tau - \nu_\mu$ mass difference which is just enough to explain the atmospheric neutrino problem as reported by super Kamiokande