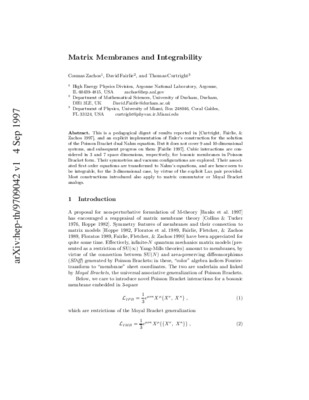 This is a pedagogical digest of results reported in Phys Lett B405 (1997) 37, and an explicit implementation of Euler's construction for the solution of the Poisson Bracket dual Nahm equation. But it does not cover 9 and 10-dimensional systems, and subsequent progress on them [hep-th/9707190]. Cubic interactions are considered in 3 and 7 space dimensions, respectively, for bosonic membranes in Poisson Bracket form. Their symmetries and vacuum configurations are explored. Their associated first order equations are transformed to Nahm's equations, and are hence seen to be integrable, for the 3-dimensional case, by virtue of the explicit Lax pair provided. Most constructions introduced also apply to matrix commutator or Moyal Bracket analogs