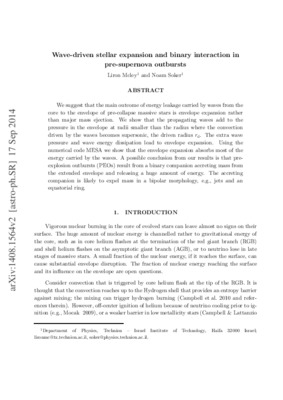 We suggest that the main outcome of energy leakage carried by waves from the core to the envelope of pre-collapse massive stars is envelope expansion rather than major mass ejection. We show that the propagating waves add to the pressure in the envelope at radii smaller than the radius where the convection driven by the waves becomes supersonic, the driven radius. The extra wave pressure and wave energy dissipation lead to envelope expansion. Using the numerical code MESA we show that the envelope expansion absorbs most of the energy carried by the waves. A possible conclusion from our results is that pre-explosion outbursts (PEOs) result from a binary companion accreting mass from the extended envelope and releasing a huge amount of energy. The accreting companion is likely to expel mass in a bipolar morphology, e.g., jets and an equatorial ring.Comment: MNRAS, in pres