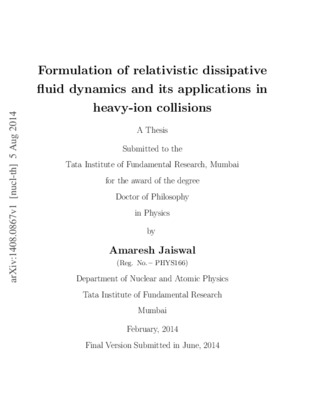 By Amaresh Jaiswal
Get PDF (2 MB)

Relativistic fluid dynamics finds application in astrophysics, cosmology and the physics of high-energy heavy-ion collisions. In this thesis, we present our work on the formulation of relativistic dissipative fluid dynamics within the framework of relativistic kinetic theory. We employ the second law of thermodynamics as well as the relativistic Boltzmann equation to obtain the dissipative evolution equations. We present a new derivation of the dissipative hydrodynamic equations using the second law of thermodynamics wherein all the second-order transport coefficients get determined uniquely within a single theoretical framework. An alternate derivation of the dissipative equations which does not make use of the two major approximations/assumptions namely, Grad's 14-moment approximation and second moment of Boltzmann equation, inherent in the Israel-Stewart theory, is also presented. Moreover, by solving the Boltzmann equation iteratively in a Chapman-Enskog like expansion, we have derived the form of second-order viscous corrections to the distribution function. Furthermore, a novel third-order evolution equation for shear stress tensor is derived. Finally, we generalize the collision term in the Boltzmann equation to include non-local effects. We find that the second-order dissipative equations derived using this modified Boltzmann equation contains all possible terms allowed by symmetry. In the case of one-dimensional scaling expansion, we demonstrate the numerical significance of these formulations on the evolution of the hot and dense matter created in ultra-relativistic heavy-ion collisions. We also study the effect of these new formulations on particle (hadron and thermal dilepton) spectra and femtoscopic radii.Comment: 163 Pages, 18 Figures, Ph.D. Thesi