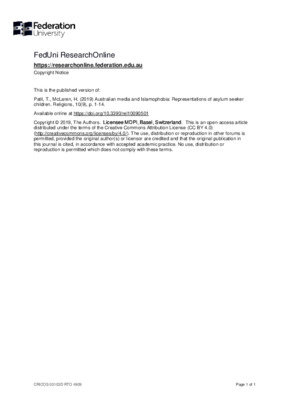 By Tejaswini Patil and Helen McLaren

Australian media invests considerable attention in asylum seekers and their children, especially those arriving by boat. In this paper, we provide an analysis of Australian newsprint media published during the term of Australia's Gillard's government (2010-2013). This period is critical as it coincides with rising numbers of boat arrivals to Australian shores, fear towards Muslims, and growing Islamophobia. At the time, there were government promises to move children from offshore immigration detention into community-based detention, that would involve living among mainstream Australian society. A data set of 46 articles from major Australian newspapers articles was subject to a discourse analysis of representations of children in both the written texts and in silences. Manipulative tactics of 'risk framing' and 'dispersed intentionality' were identified as discursive acts aimed to confuse compassion and deviancy with respect to asylum seeker children presumed to be from Islamic backgrounds. We argue that this was achieved through binary characterizations in which Muslim parents and people smugglers were constructed as deviant alongside intentional silences, that may have otherwise elicited compassion for asylum seeker children. We propose that this period of media reporting is foundational to understanding the rise of Islamophobic discourses and the implication of Muslim children in Australia