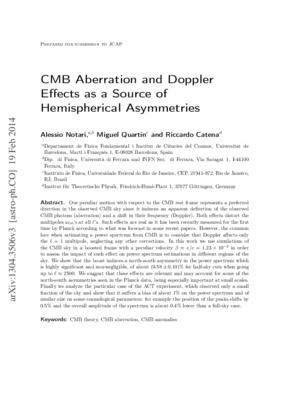 CMB Aberration and Doppler Effects as a Source of Hemispherical Asymmetries

Our peculiar motion with respect to the CMB rest frame represents a preferred direction in the observed CMB sky since it induces an apparent deflection of the observed CMB photons (aberration) and a shift in their frequency (Doppler). Both effects distort the multipoles $a_{\ell m}$'s at all $\ell$'s. Such effects are real as it has been recently measured for the first time by Planck according to what was forecast in some recent papers. However, the common lore when estimating a power spectrum from CMB is to consider that Doppler affects only the $\ell=1$ multipole, neglecting any other corrections. In this work we use simulations of the CMB sky in a boosted frame with a peculiar velocity $\beta = v/c = 1.23 \times 10^{-3}$ in order to assess the impact of such effect on power spectrum estimations in different regions of the sky. We show that the boost induces a north-south asymmetry in the power spectrum which is highly significant and non-negligible, of about (0.58 $\pm$ 0.10)% for half-sky cuts when going up to $\ell$ = 2500. We suggest that these effects are relevant and may account for some of the north-south asymmetries seen in the Planck data, being especially important at small scales. Finally we analyze the particular case of the ACT experiment, which observed only a small fraction of the sky and show that it suffers a bias of about 1% on the power spectrum and of similar size on some cosmological parameters: for example the position of the peaks shifts by 0.5% and the overall amplitude of the spectrum is about 0.4% lower than a full-sky case.Comment: 13 pages, 5 figure