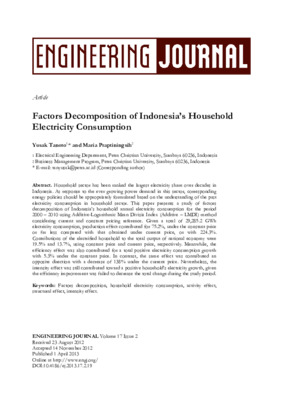 Household sector has been ranked the largest electricity share over decades in Indonesia. As response to the ever growing power demand in this sector, corresponding energy policies should be appropriately formulated based on the understanding of the past electricity consumption in household sector. This paper presents a study of factors decomposition of Indonesia's household annual electricity consumption for the period 2000 - 2010 using additive-Logarithmic Mean Divisia Index (additive-LMDI) method considering current and constant pricing reference. Given a total of 29,285.2 GWh electricity consumption, production effect contributed for 75.2%, under the constant price or far less compared with that obtained under current price, or with 224.3%. Contribution of the electrified household to the total output of national economy were 19.5% and 13.7%, using constant price and current price, respectively. Meanwhile, the efficiency effect was also contributed for a total positive electricity consumption growth with 5.3% under the constant price. In contrast, the same effect was contributed an opposite direction with a decrease of 138% under the current price. Nevertheless, the intensity effect was still contributed toward a positive household's electricity growth, given the efficiency improvement was failed to decrease the total change during the study period