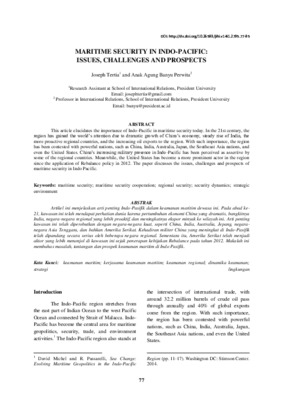 This article elucidates the importance of Indo-Pacific in maritime security today. In the 21st century, the region has gained the world’s attention due to dramatic growth of China’s economy, steady rise of India, the more proactive regional countries, and the increasing oil exports to the region. With such importance, the region has been contested with powerful nations, such as China, India, Australia, Japan, the Southeast Asia nations, and even the United States. China’s increasing military presence in Indo-Pacific has been perceived as assertive by some of the regional countries. Meanwhile, the United States has become a more prominent actor in the region since the application of Rebalance policy in 2012. The paper discusses the issues, challenges and prospects of maritime security in Indo Pacific