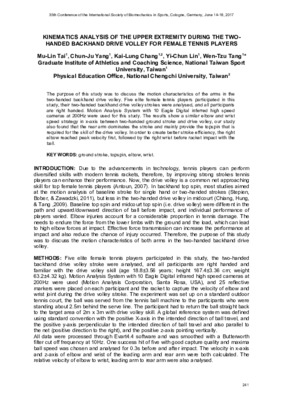 The purpose of this study was to discuss the motion characteristics of the arms in the two-handed backhand drive volley. Five elite female tennis players participated in this study, their two-handed backhand drive volley strokes were analysed, and all participants are right handed. Motion Analysis System with 10 Eagle Digital inferred high speed cameras at 200Hz were used for this study. The results show a similar elbow and wrist speed strategy in x-axis between two-handed ground stroke and drive volley, our study also found that the rear arm dominates the stroke and mainly provide the topspin that is required for the skill of the drive volley. In order to create better stroke efficiency, the right elbow reached peak velocity first, followed by the right wrist before racket impact with the ball