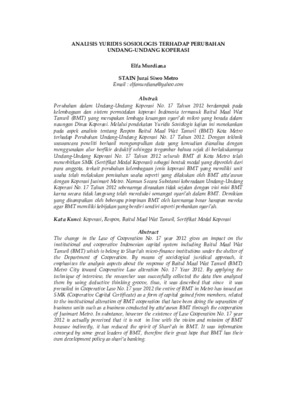 The change in the Law of Cooperation No. 17 year 2012 gives an impact on the institutional and cooperative Indonesian capital system including Baitul Maal Wat Tanwil (BMT) which is belong to Shari'ah micro-finance institutions under the shelter of the Department of Cooperation. By means of sociological juridical approach, it emphasizes the analysis aspects about the response of Baitul Maal Wat Tanwil (BMT) Metro City toward Cooperative Law alteration No. 17 Year 2012. By applying the technique of interview, the researcher was succesfully collected the data then analyzed them by using deductive thinking groove, thus, it was described that since&nbsp; it was prevailed in Cooperative Law No. 17 year 2012 the entire of BMT in Metro has issued an SMK (Cooperative Capital Certificate) as a form of capital gained from members, related to the institutional alteration of BMT cooperation that have been doing the separation of business units such as a business conducted by atta'awun BMT through the cooperation of Jusimart Metro. In substance, however the existence of Law Cooperation No. 17 year 2012 is actually perceived that it is not&nbsp; in line with the vision and mission of BMT because indirectly, it has reduced the spirit of Shari'ah in BMT. It was information conveyed by some great leaders of BMT, therefore their great hope that BMT has their own development policy as shari'a banking