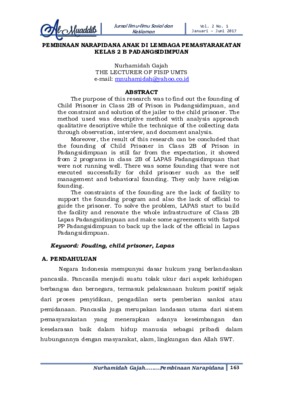 The purpose of this research was to find out the founding of Child  Prisoner  in  Class  2B  of  Prison  in  Padangsidimpuan,  and the constraint and solution of the jailer to the child prisoner. The method  used  was  descriptive  method  with  analysis  approach qualitative  descriptive  while  the  technique  of  the  collecting  data through observation, interview, and document analysis.  Moreover, the result of this research can be concluded that the   founding   of  Child   Prisoner   in   Class   2B   of   Prison   in Padangsidimpuan  is  still  far  from  the  expectation,  it  showed from  2  programs  in  class  2B  of  LAPAS  Padangsidimpuan  that were  not  running  well.  There  was  some  founding  that  were  not executed   successfully   for   child   prisoner   such   as   the   self management  and  behavioral  founding.  They  only  have  religion founding.  The  constraints  of  the  founding  are  the  lack  of  facility  to support  the  founding  program  and  also  the  lack  of  official  to guide  the  prisoner.  To  solve  the  problem,  LAPAS  start  to  build the  facility  and  renovate  the  whole  infrastructure  of  Class  2B Lapas Padangsidimpuan and make some agreements with Satpol PP Padangsidimpuan to back up the lack of the official in Lapas Padangsidimpuan