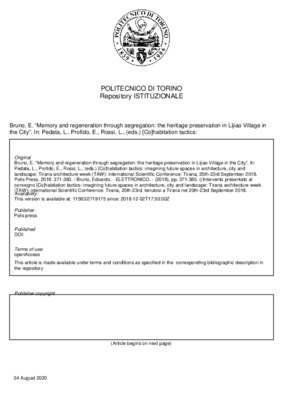 By Edoardo Bruno
Get PDF (9 MB)

Villages in the city (VICs) have become a crucial topic within Chinese urban studies, spatially exposing the contradictions between fast urbanization processes and former rural communities. Beside the social implications of these areas encapsulated in metropolitan cityscapes, their redevelopment into future gated residential communities poses a series of questions about local socio-spatial practices put in transition. For instance their overcrowded built environment, absorbing historical stratifications, is under extreme pressures facing “pro-growth” municipal urban planning visions. Lijiao village represents in Guangzhou a crucial case study to illustrate how local listed cultural heritage could confront tested tabula rasa approaches, redefining the processes embedded in these kind of regeneration projects. The paper aims to demonstrates how the presence of historical relics, permitted the activation of a series of processes diverging from the neoliberal strategies applied by Chinese urban planning bureaucracy, questioning alternative methodologies which had to re-scale actions and cooperate with local consistency. On one side the creation of lists of buildings under preservation activated the compact intervention of institutions and experts, determining rules affecting the negotiation through legitimated procedures. On the other the intervention of the private investor, seeking an efficient quantity distribution over the demolished village, perceived local memory a tangible obstacle opposing the development. Their contraposition promoted formalized spatial boundaries instead of integrating differences. Segregating cultural heritage from its local morphology, cleaning up history, therefore appears as the spatial compromise to safeguard relics elsewhere forcibly demolished or indifferently relocated. Preservation tactics and new urban development, stays one next to the other without considering the collective memory built over centuries of local practices. The spatial codification to promote development, seems the only way to surpass the contradictions of thirty years of fast urban development