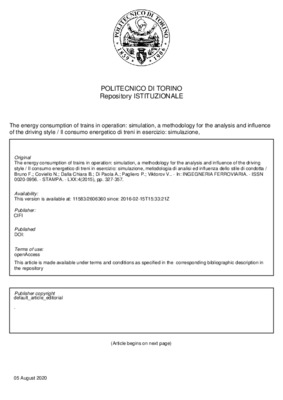 The paper proposes an analysis methodology of energy consumptions in the railway field, presenting a comparison between an analytical calculation model and some measurements. It is hereafter assessed the influence of some parameters which characterise the travel diagrams of trains. The first part illustrates the analysis of the measured speed profile of a regional passenger train and of a TGV train covering a conventional line, with a high grade (the Torino-Modane), then introducing the comparison with the hypothetical profile obtained through simulation. Such comparison therefore allows deducing and quantifying the differences between the real and the simulated travel diagram. The latter employs completely the traction performances of the convoy and, therefore, features the smaller travel time on the considered line. The second part of this paper focuses the attention on the run of a freight train covering only one of the first sections of the same line, through the integration of the motion equation implemented on a spread sheet. In this part the analysis is carried on introducing important simplifications, as neglecting the effects of the line profile (rather flat in the considered stretch), in order to facilitate the analytical model. With such assumptions the influence on energy consumptions due to the scheduled travel diagram and to the driving style is evaluated. Special emphasis is given on the consumption connected to the braking stages and the relevant influence on the maintenance of brakes and wheel-sets, which has a direct economic impact for the transport operators. The role of innovative technological solutions is highlighted