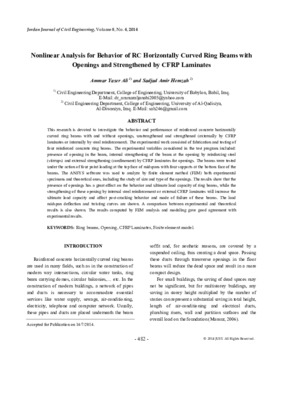 This research is devoted to investigate the behavior and performance of reinforced concrete horizontally curved ring beams with and without openings, unstrengthened and strengthened (externally by CFRP laminates or internally by steel reinforcement). The experimental work consisted of fabrication and testing of four reinforced concrete ring beams. The experimental variables considered in the test program included: presence of opening in the beam, internal strengthening of the beam at the opening by reinforcing steel (stirrups) and external strengthening (confinement) by CFRP laminates for openings. The beams were tested under the action of four point loading at the top face of midspans with four supports at the bottom face of the beams. The ANSYS software was used to analyze by finite element method (FEM) both experimental specimens and theoretical ones, including the study of size and type of the openings. The results show that the presence of openings has a great effect on the behavior and ultimate load capacity of ring beams, while the strengthening of these opening by internal steel reinforcement or external CFRP laminates will increase the ultimate load capacity and affect post-cracking behavior and mode of failure of these beams. The load midspan deflection and twisting curves are shown. A comparison between experimental and theoretical results is also shown. The results computed by FEM analysis and modeling gave good agreement with experimental results