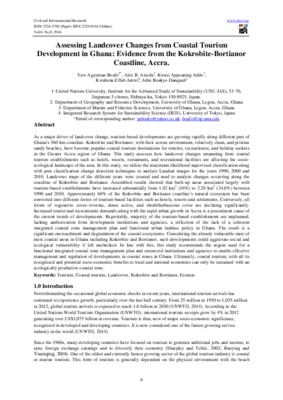 As a major driver of landcover change, tourism-based developments are growing rapidly along different part of Ghana’s 560 km coastline. Kokrobite and Bortianor, with their serene environment, relatively clean, and pristine sandy beaches, have become popular coastal tourism destinations for tourists, recreationist, and holiday seekers in the Greater Accra region of Ghana. This study assesses how landcover changes emanating from coastal tourism establishments such as hotels, resorts, restaurants, and recreational facilities are affecting the socio-ecological landscape of the area. In this study, we utilize the maximum likelihood supervised classification along with post classification change detection techniques to analyze Landsat images for the years 1990, 2000 and 2010. Landcover maps of the different years were created and used to analyze changes occurring along the coastline of Kokrobite and Bortianor. Assembled results showed that built-up areas associated largely with tourism-based establishments have increased substantially from 1.02 km2 (16%) to 2.20 km2 (34.6%) between 1990 and 2010. Approximately 60% of the Kokrobite and Bortianor coastline’s natural ecosystem has been converted into different forms of tourism-based facilities such as hotels, resorts and settlements. Conversely, all forms of vegetative cover–riverine, dense active, and shrub/herbaceous cover are declining significantly. Increased tourist and recreationist demands along with the rapid urban growth in Accra is a preeminent cause of the current trends of developments. Regrettably, majority of the tourism-based establishments are unplanned, lacking authorization from development institutions and agencies, a reflection of the lack of a coherent integrated coastal zone management plan and functional urban landuse policy in Ghana. The result is a significant encroachment and degradation of the coastal ecosystems. Considering the already vulnerable state of most coastal areas in Ghana including Kokrobite and Bortianor, such developments could aggravate social and ecological vulnerability if left unchecked. In line with this, this study recommends the urgent need for a functional integrated coastal zone management plan and resourced institutions and agencies to enable effective management and regulation of developments in coastal zones in Ghana. Ultimately, coastal tourism, with all its recognized and potential socio-economic benefits to local and national economies can only be sustained with an ecologically productive coastal zone. Keywords: Tourism, Coastal tourism, Landcover, Kokrobite and Bortianor, Erosio