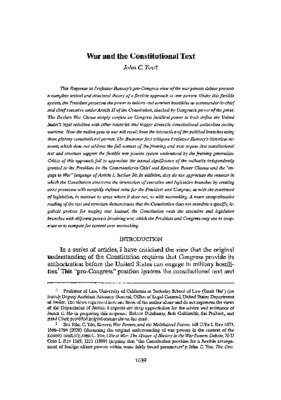 War and the Constitutional Text

This Response to Professor Ramsey\u27s pro-Congress view of the war powers debate presents a complete textual and structural theory of a flexible approach to war powers. Under this flexible system, the President possesses the power to initiate and conduct hostilities as commander-in-chief and chief executive under Article II of the Constitution, checked by Congress\u27s power of the purse. The Declare War Clause simply confers on Congress juridical power to both define the United States\u27s legal relations with other countries and trigger domestic constitutional authorities during wartime. How the nation goes to war will result from the interaction of the political branches using these plenary constitutional powers. The Response first critiques Professor Ramsey\u27s historical account, which does not address the full context of the framing, and next argues that constitutional text and structure support the flexible war powers system understood by the framing generation. Critics of this approach fail to appreciate the textual significance of the authority independently granted to the President by the Commander-in-Chief and Executive Power Clauses and the engage in War language of Article I, Section 10. In addition, they do not appreciate the manner in which the Constitution structures the interaction of executive and legislative branches by creating strict processes with carefully defined roles for the President and Congress, as with the enactment of legislation, in contrast to areas where it does not, as with warmaking. A more comprehensive reading of the text and structure demonstrates that the Constitution does not mandate a specific, legalistic process for waging war. Instead, the Constitution vests the executive and legislative branches with different powers involving war, which the President and Congress may use to cooperate or to compete for control over warmaking

Publisher: Chicago Unbound
Year: 2002
OAI identifier: oai:chicagounbound.uchicago.edu:uclrev-5139
Provided by: University of Chicago Law School: Chicago Unbound
Download PDF:
Sorry, we are unable to provide the full text but you may find it at the following location(s):