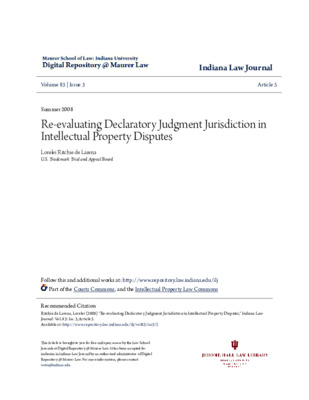 The Declaratory Judgment Act of 1934 was quickly tagged by the US. Supreme Court as a simple procedural measure. That said, the addition of the declaratory judgment option has dramatically increased the rights of would-be defendants. This is of special interest in patent law, where without the ability to initiate legal action, an alleged infringer would typically have no recourse but to either drop a lucrative business and lose a massive investment, or to languish in legal limbo while potentially accruing liability for treble damages. The option of a mirror-image lawsuit removes the patentee\u27s ability to decide unilaterally when, where-and, effectively whether-to file suit. For this reason, patent litigation is exemplary of the normative values that led to the passage of the Declaratory Judgment Act, including the delicate balance of ripeness, standing, and judicial access. Indeed, the Act\u27s proponents had patent law firmly in mind. Over the years, however, courts have begun to lose sight of this objective. Following the jurisprudence of the Court of Appeals for the Federal Circuit, district courts have increasingly applied an overly formalistic standard of justiciability in declaratory actions involving patent disputes, thereby unduly decreasing judicial access, and shifting the balance of power back to the patentee. This is largely due to confusion by the Federal Circuit and the district courts between baseline and discretionary jurisdiction. Interestingly, the courts have-by analogy from patent law-articulated the same strict standard in copyright and trademark disputes, yet they have applied the standard more broadly, thereby more closely following the normative values embodied in the Declaratory Judgment Act. This Article examines the normative purpose behind the Declaratory Judgment Act; the standards articulated and applied in intellectual property disputes; and the recent case law on the topic, culminating in the timely, although somewhat misguided, US. Supreme Court decision of January 9, 2007. The Article proposes a more appropriate standard for evaluating declaratory judgment jurisdiction in intellectual property disputes, and provides a four-part spectrum of factors for district courts to consider in exercising their discretion, in order to best align declaratory jurisprudence with the normative values that led to its creation