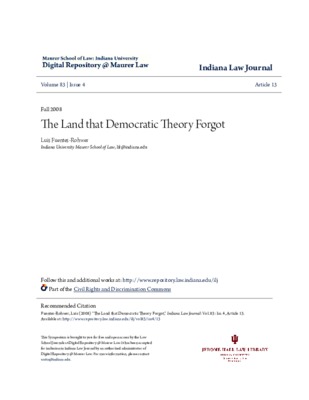 The Land that Democratic Theory Forgot

By Luis Fuentes-Rohwer
Get PDF (2 MB)

The island of Puerto Rico is officially designated as an unincorporated United States territory. Acquired by the United States in the aftermath of the Spanish- American war, the status of the island offers innumerable lessons and puzzles for students of the law of democracy and constitutional law. Begin with the fact that citizens ofPuerto Rico-U.S. citizens at birth-cannot vote in federal elections but are subject to the plenary powers of Congress. How do we justify this condition under American constitutional values and basic tenets of democratic theory? Looking to the moment of acquisition, how may we reconcile the acquisition of the island in the aftermath of the war? This question morphs into the larger question of political obligation and asks, why should citizens of Puerto Rico obey the commands of U.S. law? Finally, how can we understand the grant of American citizenship to island residents a generation later? This Article offers tentative answers to these questions, and in so doing, wishes to open new lines of inquiry about the present status of Puerto Rico. This Article concludes that the status of Puerto Rico is illegitimate and in direct tension with core democratic values. Whether statehood, enhanced commonwealth, or independence emerges as the status of choice for the island, it is undisputable that the present condition of American citizens on Puerto Rican soil must come to an end. Symposium: Latinos and Latinas at the Epicenter of Contemporary Legal Discourses. Indiana University School of Law-Bloomington, March 2007