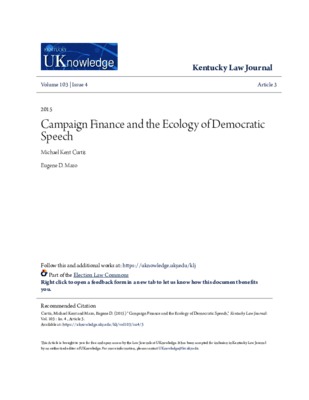 Campaign Finance and the Ecology of Democratic Speech

Biologists have contributed to our understanding of the world\u27s ecosystems, explaining how the natural world is populated by different species, which are able to thrive and blossom because of the existence of other species in the rightproportion. In similar fashion, the authors of this article believe that the political world has an ecosystem. It is an ecosystem where free speech may thrive or wither, and its fate rests on the delicate balance of political influence between citizens and corporations. This balance is disturbed when concentrations of wealth funnel into the democratic process through campaign spending. The Supreme Court, through its decisions in several recent campaign finance cases, has impermissiblyaltered ourpoliticalecosystem in favor of corporatespeech in ways that now threaten free speech. This state of affairs, the authors argue, is antithetical to the history of the First and Fourteenth Amendments and holds grave consequences for our democracy\u27s future