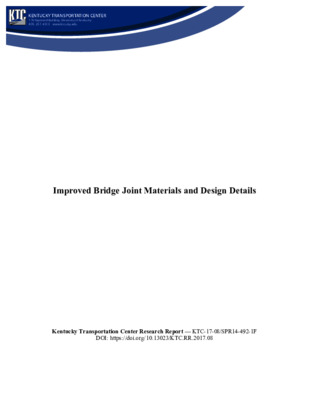 Expansion joints accommodate bridge movements that result from factors such as thermal expansion and contraction, concrete shrinkage, creep effects, live loading, settlement of the foundation and substructure, and environmental stressors. Expansion joints fall into two categories — open joints and closed joints. Open joints contain gaps that facilitate the passage of water and debris runoff through bridge joints. Flexible or stiff troughs are generally installed beneath open joints to direct runoff away from bridge elements. Closed joints produce a watertight seal that inhibits water, debris, and deicing materials from passing through bridge joints and remaining in contact with underlying bridge components. This study investigated materials and design strategies to improve the performance of both open and closed joints. Wanting to improve the durability of compression and strip seals, which degrade over time or become detached from bridge decks, Kentucky Transportation Center (KTC) researchers approached several seal manufacturers about developing new seals reinforced with puncture-resistant fibers such as Aramid. Ultimately, researchers were unable to reach an agreement with any manufacturer, as it appears they have little interest in developing better-performing conventional joint types, preferring instead to focus on producing new proprietary joint types. As the Kentucky Transportation Cabinet (KYTC) increases its use of proprietary joints, it should implement a rigorous monitoring program to track their performance. With respect to open joints, KTC investigated the use of self-purging troughs. First implemented by the Kansas Department of Transportation, they leverage the power of air flow and vibrations produced by traffic to improve the routing of water and debris through troughs and away from underlying bridge elements. Conventional troughs receive infrequent maintenance and can become clogged with debris. Self-purging troughs eliminate this problem, which can potentially help extend the service lives of bridges on which they are installed. KYTC will benefit from experimenting more widely with self-purging troughs