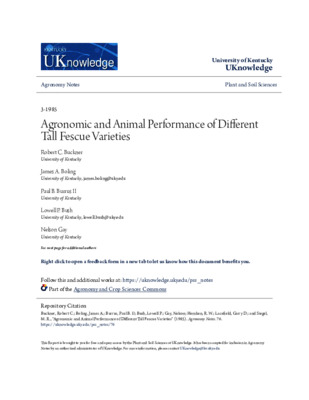 The objective of the tall fescue breeding program is the development of varieties characterized by superior nutritive value (including reduced contents of perloline and loline alkaloids and minimal infestation of the fungal endophyte, Acremonium coenophialum), palatability, disease resistance, and adaptation through the utilization of intergeneric and interspecific hybrid derivatives of ryegrass and tall fescue species. Kentucky 31, Kenwell, and Kenhy were previously released from this breeding program. Johnstone tall fescue, developed cooperatively by the Kentucky Agricultural Experiment Station and USDA-ARS, was released March 1, 1982 as a new variety. Johnstone is characterized as having low levels of perloline alkaloid and the fungal endophyte (Acremonium coenophialum) and improved forage quality during summer. It is expected that seed of Johnstone will be available commercially during 1985, and a good supply be available for /\u27 spring and summer 1986 plantings