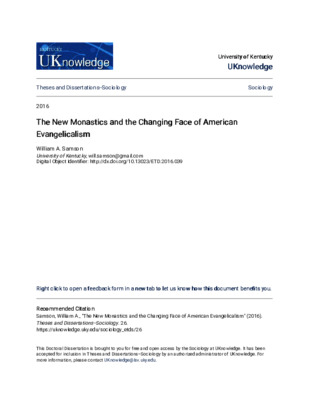 The New Monastics and the Changing Face of American Evangelicalism

American Evangelicalism is, indeed, “embattled and thriving,” as Smith et. al. (1998) have suggested, thriving precisely because it has remained in an embattled state as it cyclically seeks to establish itself as a counter to the dominant culture. However, over the last 40 years American Evangelicalism has become ingrained in the dominant culture and a new group of young Evangelicals are establishing themselves as the counter to that culture and thus defining themselves against Evangelicalism itself. Employing Smith’s (1998) “sub-cultural identity” theory of religious strength while drawing on interviews with movement leaders, members and published writings, the following research provides an overview of four social movements within Evangelicalism – Evangelical Environmentalism, social justice Christianity, the Emerging Church and New Monasticism – suggesting that these groups represent a social movement area seeking to draw a distinction in identity with American Evangelicalism. Then, drawing on over two hundred hours of in-depth interviews with 40 New Monastic leaders and community members, combined with analysis of the writings of New Monastic movement leaders, the research focuses in specifically on the identity-making activities of New Monasticism, examining the ways in which this movement seeks to influence beliefs, practices and conceptions of place within American Evangelicalism