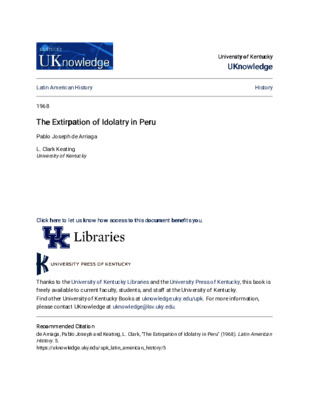 The Extirpation of Idolatry in Peru

Long recognized as a classic account of the early Spanish efforts to convert the Indians of Peru, Father De Arriaga’s book, originally published in 1621, has become comparatively rare even in its Spanish editions. This translation now makes available for the first time in English a unique record of the customs and religious practices that prevailed after the Spanish conquest. In his book, which was designed as a manual for the rooting out of paganism, De Arriaga sets down plainly and methodically what he found among the Indians—their objects of worship, their priests and sorcerers, their festivals and sacrifices, and their superstitions—and how these things are to be recognized and combated. Moreover, he evinces a steady awareness of the hold of custom and of the plight of the Indians who are torn between the demands of their old life and their new masters. The Extirpation of Idolatry in Peru is an invaluable source for historians and anthropologists. L. Clark Keating is professor of modern languages at the University of Kentucky.https://uknowledge.uky.edu/upk_latin_american_history/1004/thumbnail.jp