Associations between sexual risk behaviours, and certain beliefs and perceptions about antiretroviral therapy in Botswana

This study explored the association between sexually risky behaviour among individuals and their beliefs and perceptions regarding antiretroviral therapy or ART. Specifically, the paper examined the treatment optimism aspect of ART- that HIV is a less serious threat due to the availability of ART. In order to test this notion, the paper compared the behavior of those people who were HIV positive with those who were HIV negative. A second population subset also included in the comparative analyses were those aware of their HIV status and those unaware. To underline the prevalence of treatment optimism, the study also considered the link between ART, sexual risk behaviours and circumcision status following the 2009 implementation of the voluntary medical male circumcision (VMMC) programme in Botswana. The study leveraged secondary quantitative data from the Botswana AIDS Impact Survey, 2013 (BAIS IV) and included data from participants who completed an individual questionnaire; were aged 15-64 years old and had sexual experience. Findings from the BAIS IV showed statistically significant evidence to support treatment optimism especially among individuals who were unaware of their status. On the contrary, the co-relation between circumcision and treatment optimism were less conclusive. Interestingly, there were statistically significant relations “between treatment optimism among individuals who were circumcised,” as well as uncircumcised men. Those who were HIV-positive counter the treatment optimism argument as findings indicate that they were practicing sexual risk reduction. Findings from this paper can inform public health interventions by tailoring approaches that target specific sub-populations in the community 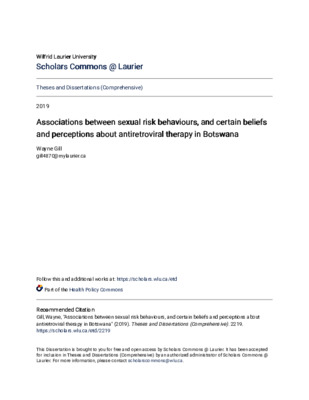 This paper was published in Wilfrid Laurier University.