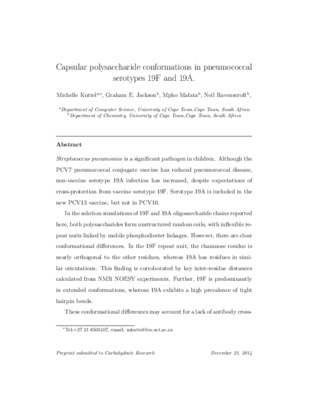 Capsular polysaccharide conformations in pneumococcal serotypes 19F and 19A

Streptococcus pneumoniae is a significant pathogen in children. Although the PCV7 pneumococcal conjugate vaccine has reduced pneumococcal disease, non-vaccine serotype 19A infection has increased, despite expectations of cross-protection from vaccine serotype 19F. Serotype 19A is included in the new PCV13 vaccine, but not in PCV10. In the solution simulations of 19F and 19A oligosaccharide chains reported here, both polysaccharides form unstructured random coils, with inflexible repeat units linked by mobile phosphodiester linkages. However, there are clear conformational differences. In the 19F repeat unit, the rhamnose residue is nearly orthogonal to the other residues, whereas 19A has residues in similar orientations. This finding is corroborated by key inter-residue distances calculated from NMR NOESY experiments. Further, 19F is predominantly in extended conformations, whereas 19A exhibits a high prevalence of tight hairpin bends. These conformational differences may account for a lack of antibody cross-protection between serotypes 19F and 19A