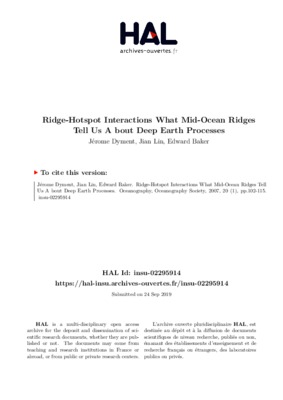 Special issue FeatureInternational audienceEarth is a thermal engine that dissipates its internal heat primarily through convec-tion. The buoyant rise of hot material transports heat to the surface from the deep interior while colder material sinks at subduction zones. Mid-ocean ridges and hot-spots are major expressions of heat dissipation at Earth's surface, as evidenced by their abundant volcanic activity. Ridges and hotspots, however, could differ significantly in their origins. Ridges are linear features that wind more than 60,000 km around the globe, constituting the major diverging boundaries of Earth's tectonic plates. Hot-spots, on the other hand, are localized regions of abnormally robust magmatism and distinctive geochemical anomalies (Figure 1). The causes of hotspots and their depths of origin are the focus of an intense debate in the scientific community. The "plume" model hypothesizes rising of buoyant mantle plumes as the primary cause of prominent hotspots such as Iceland and Hawaii (Morgan, 1971). In contrast, the "anti-plume" school argues that many of the observed "hotspot" volcanic and geochemical anomalies are simply due to melts leaking through tensional cracks in Earth's lithospheric plates-in other words, hotspots reflect only where the lithospheric plate is cracked, allowing melts to pass through, and not where the underlying mantle is hotter (see www.mantleplumes.org). A hybrid notion is that only a relatively small number of hotspots, especially those of enormous magmatic volumes, have their origin in buoyant thermal plumes rising from the deep mantle (e.g., Courtillot et al., 2003). Regardless of its specific depth of origin, however, when a hotspot is located close enough to a mid-ocean ridge, the two volcanic systems will interact, resulting in unique volcanic, geochemical, and hydrothermal features. In this paper, we discuss major features of hotspot-ridge interactions