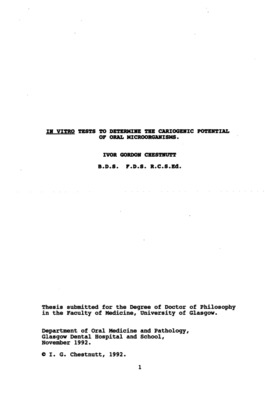 In Vitro Tests to Determine the Cariogenic Potential of Oral Microorganisms

In the aetiology of dental caries, a definite bacterial role was first proposed by W.D. Miller (1890). In the interim, many researchers have investigated the relationship of oral microorganisms to the disease process. Since the 1960's, members of the mutans streptococci have been implicated consistently as playing a major role in dental caries, due mainly to significant correlations between the number of these streptococci in saliva, and caries experience. The recent decline in caries prevalence has demonstrated that individuals differ in caries susceptibility, and within communities there exist high-risk groups and individuals. Such findings have highlighted the desirability of determining accurately the caries susceptibility of an individual patient prior to, or at a very early stage of disease initiation. Currently available caries-activity tests have concentrated mainly on the numbers of organisms present in saliva, with no account taken of potential differences in virulence. Increasingly, it has been realised that such tests lack sufficient sensitivity and specificity to permit reliable identification of the at-risk individual, rendering them of limited usefulness clinically. Macpherson (1988), suggested that strains of S. mutans differ in their cariogenic potential and that such differences correlated with clinical disease experience. This thesis aimed to investigate further, the in vitro cariogenic potential of oral microorganisms. The microbiological methods and analytical techniques used in the study, and the isolation, identification and storage of clinical isolates were described (Chapter 2). The technique of isotachophoresis was also detailed, and previously unreported factors influencing isotachophoretic analysis were identified whilst validating the technique. This Chapter concluded by describing the detection of calcium by complexation with o-cresolphthalein and compared the technique with atomic adsorption spectroscopy. The in vitro test system described by Macpherson (1988), involved the incubation of a bacterial cell slurry, a slab of bovine enamel, and a 5% sucrose solution for two, 24 hour incubation periods at 3