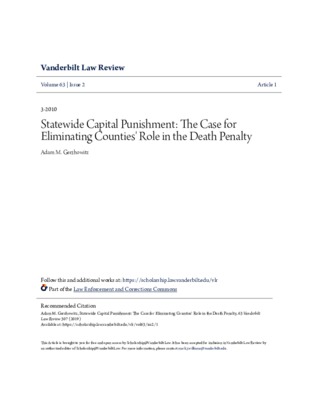 Statewide Capital Punishment: The Case for Eliminating Counties\u27 Role in the Death Penalty

The State of Texas is known as the capital of capital punishment.\u27 But is that reputation deserved? In a way, yes. Texas sends more people to death row than any other state, and it executes them far faster. However, in another way, it is incorrect to suggest that the State of Texas is a prolific user of capital punishment. Death penalty cases are prosecuted by counties, not the state, and a majority of Texas\u27s counties have never imposed the death penalty. In fact, only a handful of Texas\u27s 254 counties regularly seek the death penalty. Many other states have a similarly disproportionate utilization of capital punishment among their counties. The uneven use of the death penalty across the nation leads to serious problems. Perhaps most obviously, the counties that often seek the death penalty sometimes choose borderline cases and try them very aggressively in order to win death sentences. Subsequently, many of these cases are reversed on appeal or, worse yet, result in controversial executions that raise serious questions about the culpability of the inmate and provide fodder for critics of capital punishment. This criticism tends to fall on the entire state, rather than on the county that prosecuted the case