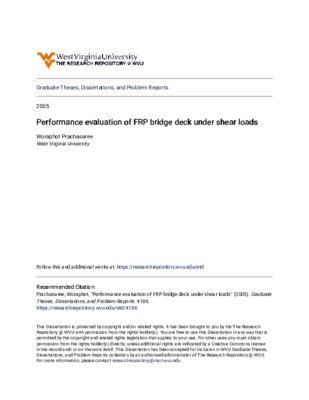 Shear behavior of glass fiber reinforced polymer (FRP) composite coupons, components, and systems is studied under torsional shear, in-plane shear, racking shear, out-of-plane shear, punching shear, and shear of web-flange junction. In addition, local deflection including web buckling of different FRP deck types has been evaluated and reported. FRP composites have been tested under a wide range of shear load conditions and their data has been compared with theoretical evaluations. Experimental data revealed that the shear modulus of FRP bridge decks ranged from 0.25 to 0.5 msi, shear stress ranged from 3 to 12 ksi, while the shear strain to failure was about 10,000 microstrain. Experimental shear modulus under torsion and in-plane shear correlated well (\u3c10%) with the results from the Simplified Classical Lamination Theory (SCLT) and finite element method. In addition, in-plane shear strain based on SCLT, is found to be in good agreement with the experimental results for specific locations of a test specimen. It is found that plate action on torsional rigidity at system level after neglecting joint inefficiency (100% load transfer across joints) is found to be about 20.0% higher than in terms of a beam model. Moreover, plate action under torsion of refined model with joint efficiency (80% load transfer) is found to be 6%, different from the case where 100% load transfer across a joint is assumed.;A theoretical model based on specific types of FRP deck specimens for predicting punching shear capacity is proposed and validated through our experimental data. In addition, failure modes of test specimens are reported. To study the web-flange junction behavior, both open and closed FRP sections are tested under shear-bending effect. It is clear that the web-flange junction shear strength is only one half of the shear strength obtained from flange specimens under V-notched beam tests. The failure modes of both open and closed sections are similar. Cracks and layer delamination around web-flange junctions are found and extended along the thickness of the web portion with increasing applied loads leading to web shear-off failure. (Abstract shortened by UMI.)