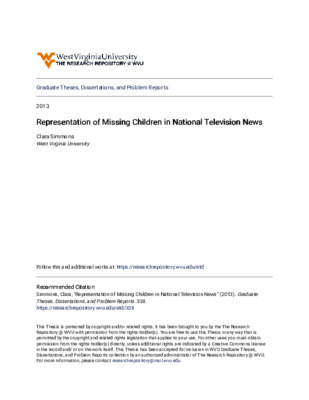 This study examines how closely representations of missing children in television news reflect missing children statistics from official sources. The methodology used in this study was a content analysis of five national television news stations from 1987-2011 using the Vanderbilt Television News Archive. News segments were coded for race, gender, age, the situation of the disappearance, and the relationship of the victim to the offender. These proportions were then compared to the proportions provided by three official data sources: two from the Federal Bureau of Investigation (FBI), and one from the Office of Juvenile Justice and Delinquency Prevention (OJJDP). Some of the key findings are that: 1) kidnapping cases were over-represented when compared to the NISMART; 2) cases involving strangers as suspects were over-represented when compared to the NISMART; 3) African-American children were under-represented in the media when compared to all three comparison sources; 4) no conclusions could be made for gender because of conflicting results between comparison data sources; 5) FOX News differed from other news stations (ABC, CBS, CNN, and NBC) in their coverage for certain analyses; and 6) the news stations, excluding FOX news, shifted their coverage for certain variables across time