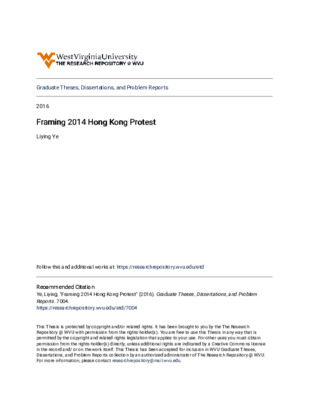 Numerous newspapers have documented the stories of the 2014 Hong Kong protest, but there was a void of systematic analysis of the protest coverage. To partially fill this gap, this study utilized the most five common news frames- conflict, human interest, responsibility attribution, morality, economic consequence- to probe how they were used in different newspapers within their media systems. The attitudes, or tone, towards the Hong Kong protest was also examined to gain an in-depth understanding in relation to different framing strategies. A total of 105 news article from China Daily (Mainland China), South China Morning Post (Hong Kong) and New York Times (the United States) were selected for content analysis. Through empirical data collected, it was found that conflict, human interest, and responsibility attribution were the most frequent used framing strategies in reporting 2014 Hong Kong protest. The frame of economic consequence was associated with the negative tone of the protest. Neutral tone was the dominant attitude towards the Hong Kong protest